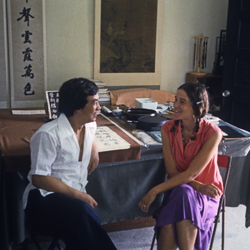 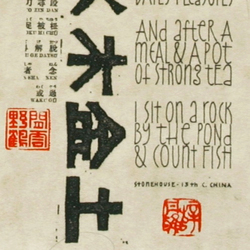 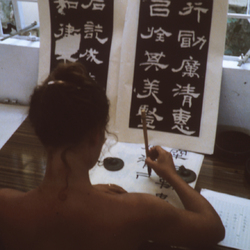 After graduating from Reed College in 1979, I went to study the disciplines of brush calligraphy in Japan and China, intrigued by the spiritual aspect of that artistic tradition in Asia. The renowned calligrapher Wucius Wong had written me a letter of introduction to Jat See-Yeu, the man whom he believed to be the most talented Chinese calligrapher in the Hong Kong area.  I made a pilgrimage to the island of Cheung Chau, winding my way up along tropical footpaths until I found Mr. Jat's studio.  We couldn’t communicate with words but we connected as student/teacher, and I worked with great determination for months under his eagle eye, practicing long hours diligently in extreme heat and humidity, focusing on learning new tools, new forms, new language, and new ways of seeing.  One day Mr. Jat met me on the ferry, very excited.  He had found my Chinese name!  My name, which sounded quite a bit like Diana, Tan Ya, was to be Red Elegance.

I didn’t know it at the time, but that moment was pivotal for me, a kind of spiritual initiation into the life of being an artist.  The stone chop that he carved and presented me with is the one I still use to sign my works on paper, over three decades later.  After my studies in Chinese calligraphy, I found a Japanese teacher in Japan, who I also worked very seriously with for over a year.  From these two masters I learned a tremendous amount about composition, eye-hand coordination, respect for materials, and commitment to practice.  My Asian foundation has held me solidly through graduate work in London, collaborative work in Paris, more than two decades of printmaking in Santa Fe, and my current journey as a mixed media painter on large panels.

This year I learned from a colleague of Chinese origin that my name also insinuated "celebrated" in a humble but significant way, and suddenly I wanted to thank Mr. Jat for this compliment, and for all that he offered.  I communicated with a woman in California who studied with him for decades, asking for his contact info.  She wrote back, sadly informing me that Mr. Jat died a few years ago at 74, after a lifetime of high honors and awards from the government of Hong Kong, the universities, and the pretigious museums there.  I loved hearing that he was a kind of renegade as a mature artist, calligraphing on a nude woman's body, working with a broom as a brush on the streets of Hong Kong, doing calligraphy to music performed by the symphony.

This Chinese American woman has been remarkable, spending hours translating in a very scholarly manner the gift of his calligraphy that he presented me with when I left Asia.  I never knew its entire meaning, so it felt like a message from him posthumously.  The text talked about our special connection and rapport, my “untiring diligence and tremendous drive”, and ended with the ancient proverb “Facing the pond to practice calligraphy”.  She said, “This proverb is used to praise hard-working students who study tirelessly, with determination.” It refers to a famous calligrapher in the 2nd century who lived near a large pond, practicing so hard and long that it is said that the pond turned black from so much cleaning of his brush.

Her ultimate gift to me though, was in response to my story about how Mr. Jat found my name and carved me my chop.  She wrote back and said, “You are very lucky.  He never carved a chop for any of his other students.”  Of course this whole exchange made me want to work harder than ever, to find the true expression of Mr. Jat's faith in me as an artist.