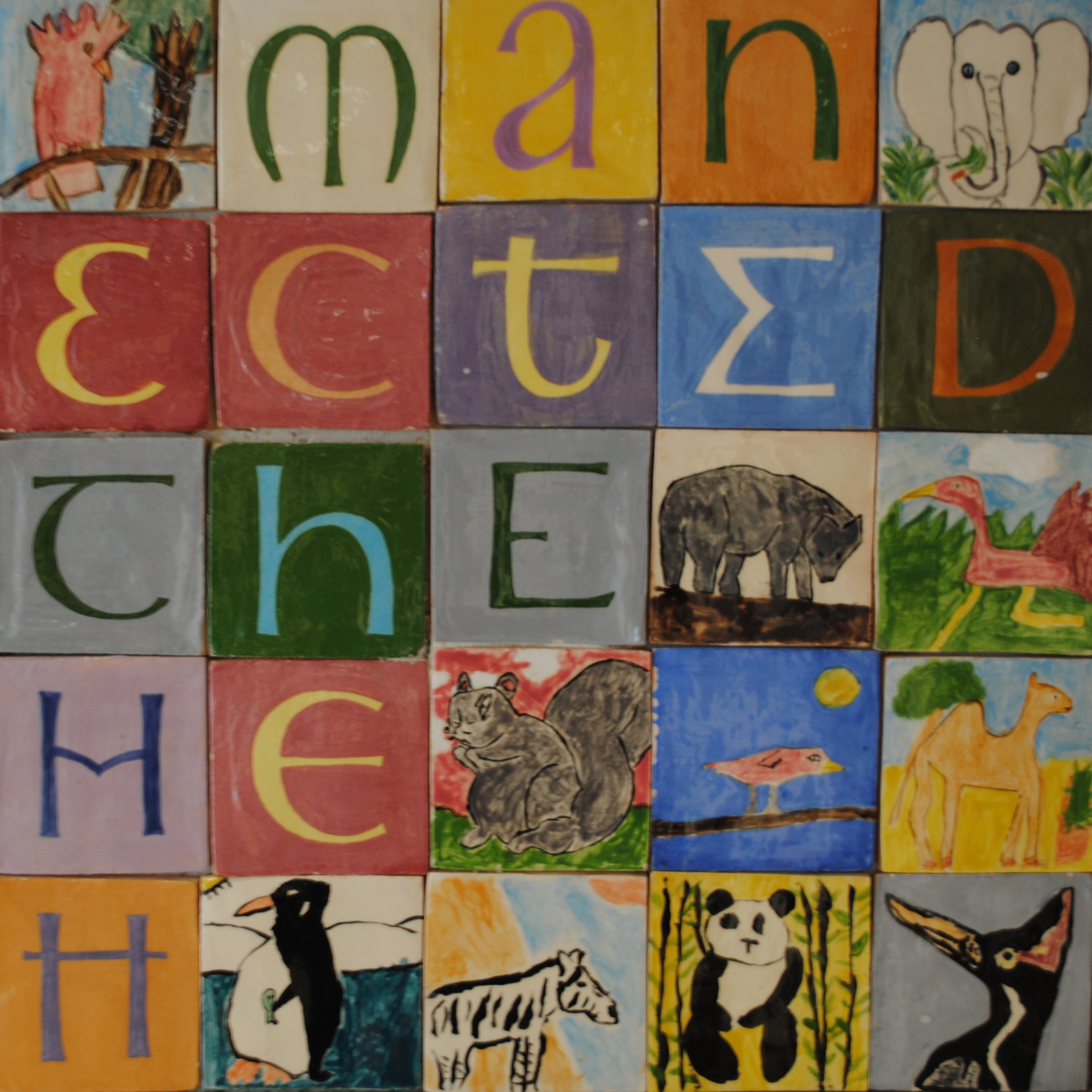 In 1990 I received a small grant to create a mural for the Albuquerque Zoo.  I made 240 tiles by hand, some of which I painted letters on to spell out a quote attributed to Chief Seattle:  “If all the beasts were gone, man would die from a great loneliness of spirit – for whatever happens to the beast also happens to the man.  All things are connected.  Whatever befalls the earth befalls the sons of the earth.” One of the innovative aspects of the project was working with over 60 elementary school children who painted all manner of birds and animals with glazes on the tiles as part of the mural.  The children worked very hard on their paintings, and chose remarkable subjects, including several endangered species.  All tiles were fired and mounted into a mural that still hangs prominently at the entrance of the Education Building.  The project was an inspiration for everyone involved, and was a kind of portent of the work that I’d be called to do as an artist for the rest of my career.

“While watching animals at the Rio Grande Zoo last fall, Albuquerque artist Diana Stetson got an idea        for a mural with a simple, important message about rescuing wildlife……“ It’s a spiritual statement about our connection with animals and all living things,” Stetson said of her message, which is a quote from Chief Seattle in the 1800s.  “If all the beasts were gone, men would die from a great loneliness of spirit, for whatever happens to the beasts also happens to the man,” the mural will say. “All things are connected. Whatever befalls the Earth befalls the sons of the Earth.”…

…Each letter in the mural’s quotation is painted on a 3-by-3 inch, handmade tile....To find young artists to paint the animal tiles, Stetson held a contest for third, fourth and fifth graders at randomly chosen Albuquerque elementary schools – Bandelier, Longfellow, East San Jose and Collet Park. She received 500 entries.  “They were beautiful,” Stetson said. “I ended up getting a really great assortment of animals. I got everything from ostriches and crabs to whales and dolphins.”

…“The kids were so great to work with. They knew how important this was. They knew this would be permanent….that when they grow up they could come and see the mural."  More than 500 animals – including the extinct Ivory-Billed Woodpecker and several endangered species – will be represented in the mural.

Stetson has worked on other community projects. For example, she recreated 12 large manuscript pages from “Don Quixote” as part of a 1 Percent for the Arts grant from the Albuquerque Arts Board. The pages are on permanent display at the city’s Special Collection Library.  However, Stetson said, she had never worked with children on a project.  “They were very inspiring to me because they were so focused on what they were doing and they were so talented.”